Dating During Quarantine: Ask a Matchmaker, a Dating Coach, & a Rabbi ANYTHING!

Dating During Quarantine: Ask a Matchmaker, a Dating Coach, & a Rabbi ANYTHING! 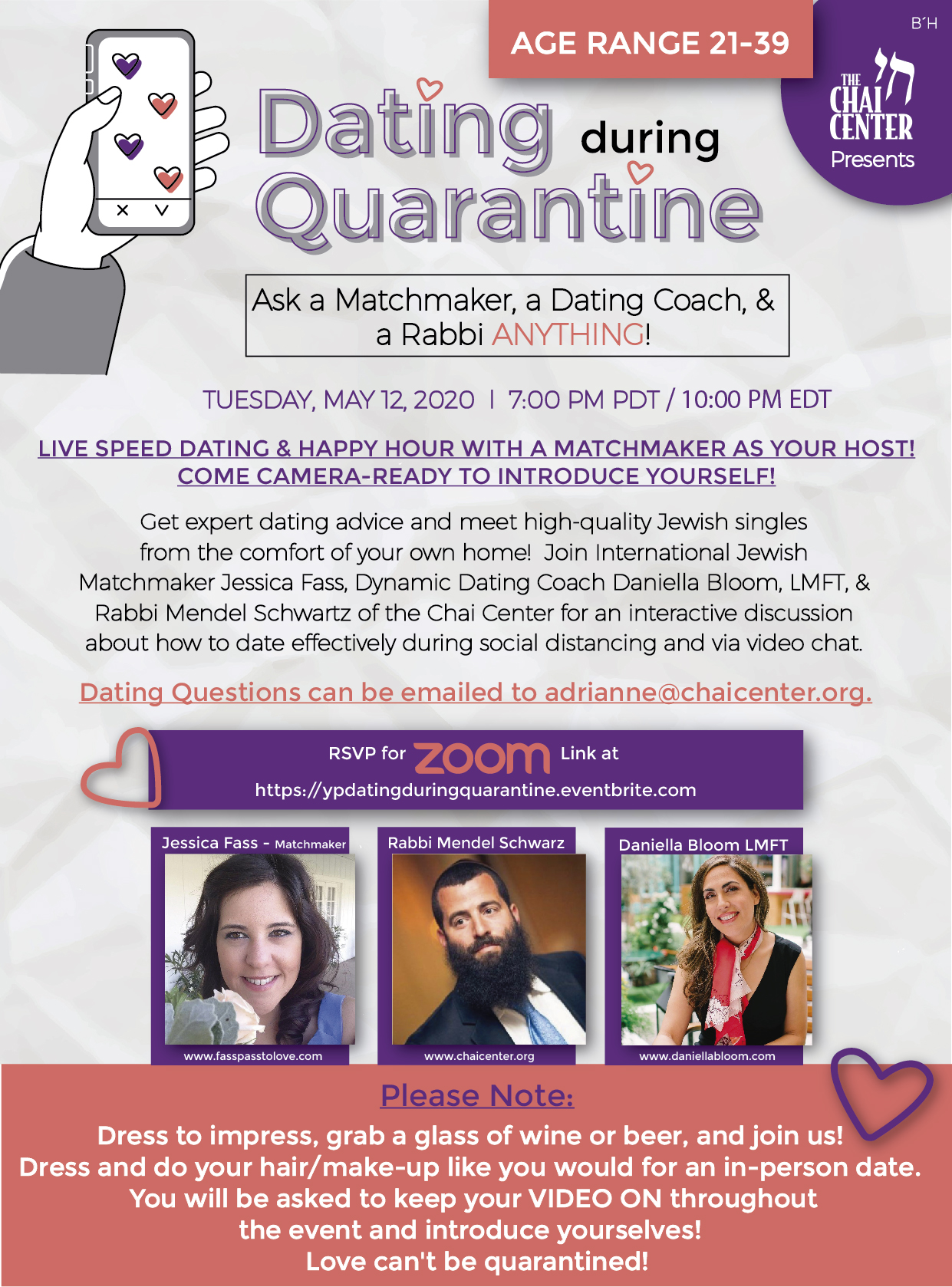 Join International, Award-Winning Jewish Matchmaker Jessica Fass & Jewish Dynamic Dating Coach, Speaker, & Author Daniella Bloom in collaboration with Rabbi Mendel Schwartz of the Chai Center for an interactive discussion about the state of modern dating and how to date effectively during social distancing and via virtual dating / video chat platforms. It’s a WHOLE NEW WORLD out there for daters during these times, and we’ve got you covered!
Come prepared with all your burning questions – ask us anything about in-person or virtual dating – anything you’ve ever wanted to ask a Matchmaker, a Dating Coach, & a Rabbi, but were too shy to ask! Questions can be sent ahead of time in the Registration Form or emailed to adrianne@chaicenter.org. You may also ask us your Q’s LIVE in the Q&A box during the webinar.

Please Note: Try to dress to impress for this event! Dress and do your hair/make-up like you would for a real life, in-person date! You will have the opportunity to turn on your cameras and introduce yourselves to the other participating singles for a 30 sec. “Dating Elevator Pitch” at the end of the Webinar. 💟

Love can’t be quarantined – let us help you to keep navigating dating and relating during these uncertain times and possibly find love where you least expect it – in quarantine!

Zoom Meeting link to register: you will receive after your registration

Mendel Schwartz, director of development for the Chai Center graduated Brooklyn Rabbinical College and received his Rabbinical ordination in Melbourne Australia. After studying in a wide array of countries which included Israel, France, Russia and Katmandu Nepal. Mendel was asked to serve for the Ministry of Tourism and live in Jerusalem for three years with his wife Esther. He returned in 2003 with his family and now lives in Los Angeles devoting most of his time studying with people in their late 20’s and early 30’s and creating social events for the Los Angeles community at large. Mendel & Esther have four boys.

Rabbi Mendel Schwartz, lives in Los Angeles with his wife Esther and their six children serving as full time Rabbi for the Chai Center specializing in Young Adults, Jewish Singles, and Shabbat dinners at the Cannes & Sundance Film Festivals.

jessica@fasspasstolove.com
Jessica Fass hails from Los Angeles, CA, but spent 2011-2016 living in her Jewish homeland of Tel Aviv, Israel, where she launched her professional matchmaking company Fass Pass to Love (a play-on-words for the Disneyland “Fast Pass”) for new immigrants to Israel from all over the world, including North America, Eastern & Western Europe, Latin America, and Australia, and English-speaking Israelis in Sept. 2013 to foster romantic connections. Jessica’s personal matchmaking “niche” is matching international Jewish people worldwide, and the marriages she’s responsible for to date include an Israeli man to a Danish woman, an Israeli man to a Dutch woman, an Israeli/Swedish woman to a French man, an American man to a Brazilian woman, a man from Uruguay to an Israeli woman, and two American Jews, among others.

Previously, Jessica worked as a script manager and on-set assistant in Hollywood from 2005-2010 on TV hits such as “Two and a Half Men” and “The Big Bang Theory” for Warner Bros. TV, and “The Suite Life of Zack & Cody” and “Doc McStuffins” for the Disney Channel and Disney Junior, respectively. Working in TV production is where Jessica learned to listen to, manage, and have patience for all different personality types, from the disgruntled prop master, to famed actor Will Smith, to the most meticulous Executive Producer who requested his coffee with the “perfect amount” of steamed soy milk, all experiences which she accredits to being an excellent Matchmaker and Dating Coach today.

She holds a BA in Screenwriting and TV Production from Chapman University in Southern California and is also an amateur stand-up comedian for fun, performing in venues in LA, NYC, and Tel Aviv! She now uses her comedic skills to speak candidly and humorously about modern dating and relationships in seminars and panel discussions throughout the U.S. and Israel. She also hosts Jewish singles events and mixers in LA, New York, and Tel Aviv, with her matchmaking partners Daniella Bloom, Jenny Apple, & Layla Book (in LA), Erin Davis (in NYC), and Gali Shani (in Tel Aviv).

Jessica obtained her Matchmaking Certification from The Matchmaking Institute in New York. She also won the distinguished honor of Highly Commended Best New Dating Personality at The U.S. Dating Awards 2016. Jessica is very excited to be using her “producing skills” that she honed in Hollywood to now “produce” her Clients’ love lives! Her goal in life is to give the whole wide world a “Fass Pass to Love!”

A psychotherapist and transformational relationship coach who specializes in honest human connection, Daniella brings nearly two decades of professional experience and personal wisdom to single, married, and divorced individuals and audiences she coaches.

Recognized as LA’s Premiere Divorcée Success Coach and Dating Expert Extraordinaire by Southern California Life Magazine, Daniella has seen it all and been through it herself. She is a frequently invited guest on stage, television, radio and in-print for her frank modern-day take on relationships and dating optimization success. She has her pulse on the real issues plaguing relationships today and what it takes to successfully enter a new chapter.

A candid and comedic speaker, Daniella was most recently featured on “On Air With Ryan Seacrest,” “Good Morning LALA LAND” and “The Huffington Post,” as a relevant Relationship Expert.